I have always been fascinated by the human face in drawing, painting and photography. This interest developed during my studies at the Art Academy when I began to cultivate a realistic style, despite that the fashion of the day was installations, videos and varieties of postmodern art. 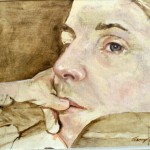 Naturally, this led to that I began to get portrait commissions which I greatly enjoyed: it is always an adventure to try to capture the personality of a particular person. When doing my military service, they actually allowed me to sit and paint in a little storage room for military equipment: helmets and such stuff. One day, I was notified that the regimental commander had visited my “studio,” and decided that I was competent enough to paint his portrait. First I did a personal portrait of him in camouflage uniform; and when this was deemed acceptable, I did the official one when he retired. The portrait was solemnly uncovered with literal fanfares. It was a deliciously anti-modern act of art.

While I worked on my Ph. D. in History of religions, I did not have much time for painting; and also during my work in Norway until 2007. Moreover, the first years back in Sweden, the old house we were renovating swallowed up much of my time. 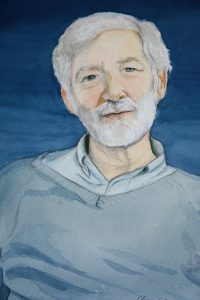 I have now turned back to portraits, not to begin with in oil, but in watercolor and mixed media. I have a dream of transforming our old stable into a real studio especially designed for portraits, both in painting and in photography.